You wake up in the back of a cart during one of the coldest days of Winter.

Where did you come from?

Triggering things are in this game. Please read the content warnings in the game.

Remember, your choices have consequences.

- You don't need no one, just sleep

- Adjustable text for mobile readers and such!

The coachman of the cart that you woke up in. He's a serpent-merfolk hybrid who's a professional desert gunslinger. His laidback and playful demeanor sometimes wavers and make you wonder - is he just playing a face?

A fellow traveler in the cart you woke up in. They're an innocent little bard who flew from an island off of the Lyrian coast called Xi'tal. They're fairly short for a stryx but makes up for it in their open extroverted personality and wing span. They're super optimistic  but you wonder - what if they're smarter than they seem?

A stranger who you meet when arriving in Waetyn. They are very freeing when you talk to them, as if the wind was a person. He also gives off a strange radiance - is he hiding something?

The bartender and owner of The Cat's Brew. She's a witch who's skilled both in drink making and potion making. She's a motherly character who seems to worship you and possibly know you - she has to know something about your past.

(Note- Since the story has changed some of the character's have been altered or removed. If you want suggest a LO of a kind you can join our discord below and go to the Ethereal channel)

There's still a bug with the witch race!

Here's what I do:

What identity and pronouns (or hair or eyes or skin) I pick don't seem to make a difference.

Yeah, uh, I haven’t fixed it. I’ve been away from fixing or working on this game for mh reasons. I’ll make a log once I make another update. Sorry but you need to use another race for now

I can't choose any height as a Gnome, it simply wouldn't  let me. Also on that note can you add a special height for gnomes (0.8-1m) that affects dialogue and gameplay? I think it'll be funny. Just a suggestion though as I see that that could be a lot of unnecessary work.

What’s with me and messing up the program with heights? Anyways, I’ll fix that when I can (And I get over my mistake of accidently deleting my friggin work…)

I’m not sure I can do the dialogue and gameplay thing with height or add a special height since I’m doing a merge with the heights since I’ve extended my knowledge on programming. It’d also add to my work load and if I do add it I’ll probably forget about it since it’ll be at the bottom of my priorities… And considering I’m also working on another story and a bunch of side projects/programming tests

Sorry for the long message 🙇‍♂️

Will there be a monster lover option?

Like a miscreant kind of monster or something closer to Rolland? If you have a suggestion for a RO you can join our discord and go to the Ethereal channel <3 (Of course you’ll need to introduce yourself and be let in by me or an admin. I’ll be online Saturday afternoon)

Error/Bug: When I go in to play as a witch and choose my eye color it circles back around to choose your eye color and I do then it ask if I'm a human or a gnome and I'm neither and I can't skip it so I can't play as a 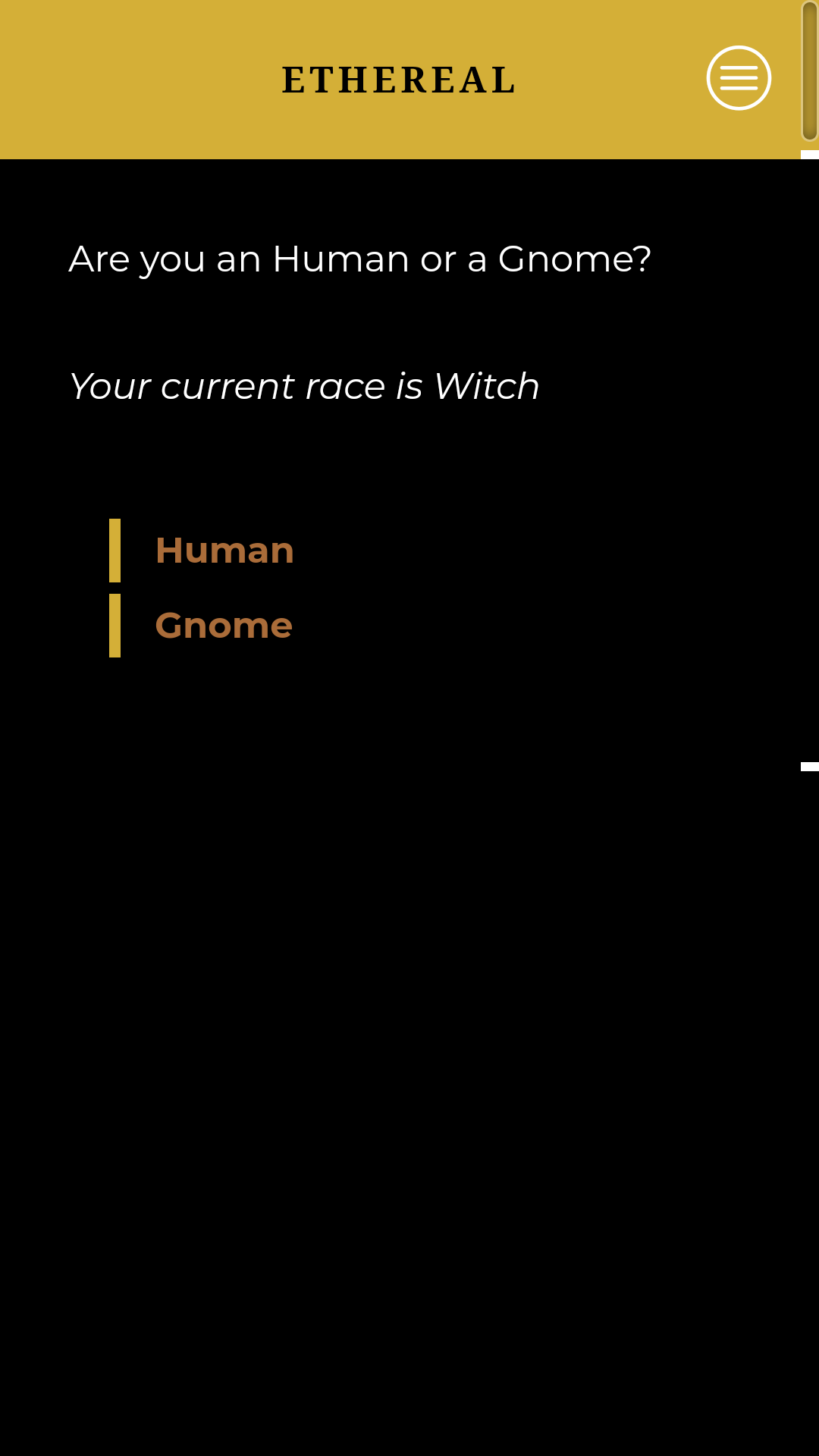 I must’ve forgotten to put the right link for the witch. My bad 😅 I’ll get back to you once I’ve fixed it

Hello! So, I cannot find what went wrong :( can you please tell me exactly what things you selected so I can try to get to the bottom of this?

Ok so I selected the following: Born as a female identifies so, she her hers,witch,hair color black, hip length, down, Olive skin tone,eye color violet,click witch again

I still haven’t been able to find the glitch- I even tested it for myself and I can’t find it. Maybe it’ll go away in the next update? I do plan to change that CC part so you don’t have to worry about it :,)

When making a character, even though it's one of the three options for the height of an Elf, you can't pick the 1.7m option

Can you show me a picture? I need a reference of what you’re talking about or more detail so I can locate the bug :)

When you choose Elf as the race and then takes you to where it asks for your height it will only let you choose the first two options but not the 1.

I’ll see what I can do about that and add that fix in for the next update :)

For a demo. you got my attention, honestly if there was a discord server or twit feed for this I'd be happy to join to keep up with this game!

Our tumblr sends updates on our games. Right now I (The programmer and Author/Manager) am busy with personal life and I haven’t had time or availably to do stuff. During weekends, main holiday breaks, and summertime I’m most active and working. I’ll see about the twit feed though (I have negative experiences with discord so that’s a hard no, apologies)

Hello again! I’ve been thinking on your idea about the discord and decided to make one! Please feel free to join!

cool! I'll be there!

Great! I currently have no admin and it’s just me. I can only go on during most weekends and holidays. Let me know if you need me to update your role and I’ll see when I can add you to the members list :)

Im experinced with making servers and Im currently making one now if you need staff memebers!

Great! You can apply and I can look it over. I just want to make sure nothing happens wrong with the server.

ah, there seems to be a problem when I try to choose the heights 170cm-180cm and below as a pure human! It only allowed me to choose the two tallest heights ><

I’ll try to fix this in the next small update. I’ve been busy with other things for the past few days so I apologize. :(

Ah, no worries! I understand that life gets busy ^^

Just letting you know since I don't think it was reported :3

Hello, I was wondering what was happening here:

I had chosen an elf character, and the same thing happens when I select the Witch character as well.

I can’t progress beyond the error message.

Ah٫ super sorry about that. With the elven CC I hand typed most of the code. One of my testers pointed this out to me. I’ll let you know when I fix it :) Sorry for this 😅

The red text is hard to read on dark mode and my eyes are sensitive to light mode a never ending cycle D:

Sorry about that, but maroon is the only acceptable color for the text because I can’t use white for it strains my own eyes. I’ll attempt to find another color but it’ll probably stay maroon for awhile.

Though now there's this thing with the witch and elf eye options i dunno what it is or how to fix it? 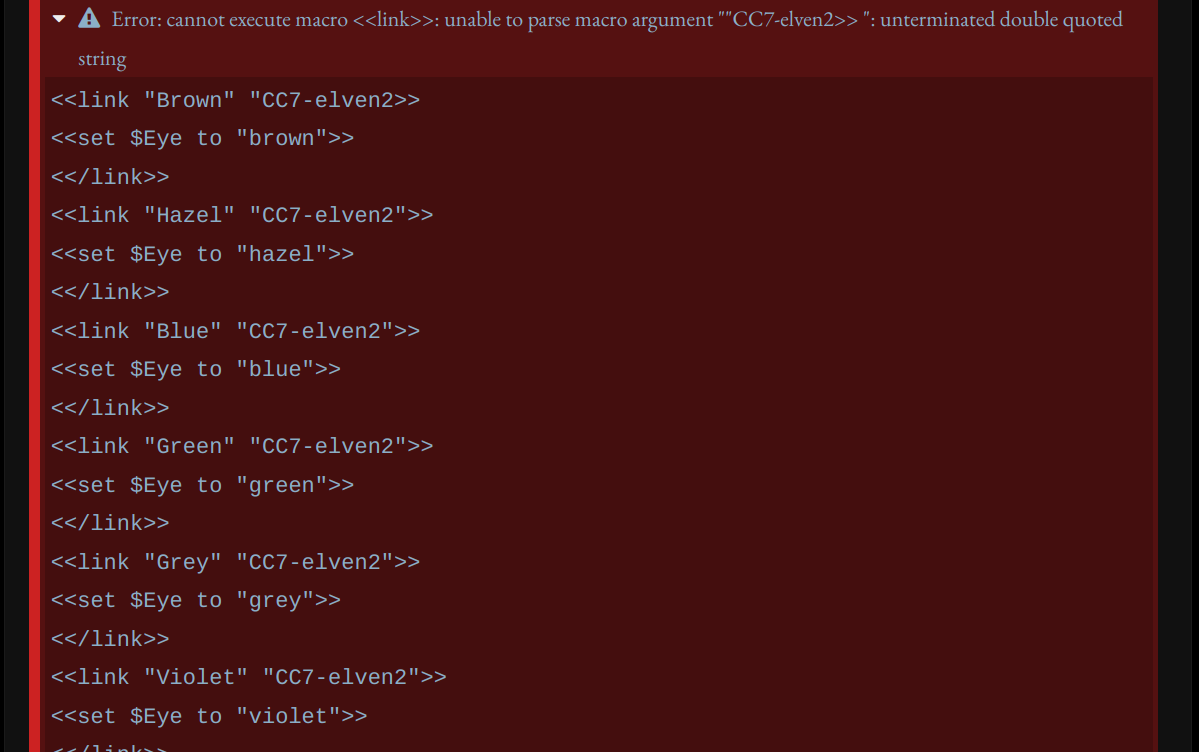 Just fixed it and changed the files. It should work now ;;;;

Enjoyed the current demo! Just a typo in the first paragraph of ch 1:

You woke up. Who are you? You looked around to see where you were. The frist thing -> first thing

Thanks for writing it!

Oh, thanks for letting me know! It’s a mistake I make a lot since I type fast. Oh the curses of having bad hand coordination… (Also I just write and type things faster than my brain can comprehend 😂)

I fixed that typo and a few others I caught :) Feel free to find any more typos for me 😂 (Jk, you don’t need to, but I appreciate your assistance :3)

Dammit, I just wanted to cuddle with Raen!

Just updated the game so now you can cuddle with Raen ;)

The first few lines reminded me of Skyrim very much lol

In Skyrim, the player character wakes up in a horse cart  too. Then another character says "Hey, you, you're finally awake."  That's where the similarity ends tho.

Also I'm looking forward to how the story will go :) seems interesting so far

Woah- I’m glad you like what there is so far! It’s might change look though bc I’m switching from Harlowe to SugarCube for the programming for more features

I really really want to see what happens in this story but the far right edges of my screen get cut off and I can't adjust it to be able to read all it. Is there a way to access a settings menu to make the text smaller?

I plan to change the story to format from Harlowe 3 to SugarCube so the text will hopefully fit the screen. I just need to figure out how to do stuff in SugarCube but rest assured that I’ll put out the next version soon! (Plus there’ll be more features and story.)

I'm excited to hear that and thank you so much for the fast reply! Take your time.

I try to keep within reach of the people who enjoy the stuff I make! And thank you! ^^

There should be a feature now that allows you the make the text smaller AND bigger!